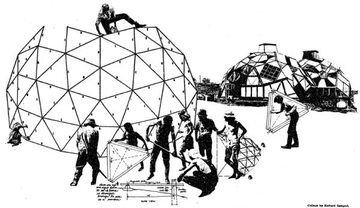 Don was 22 years old when he dropped out of Evergreen and went into the dome building business, setting up shop in the home of a friend on Cedar Street near the river, where he built a greenhouse. And then, “Gene showed up one day. He heard about me and he looked at this (the greenhouse) and he said ‘can you build me one?’”