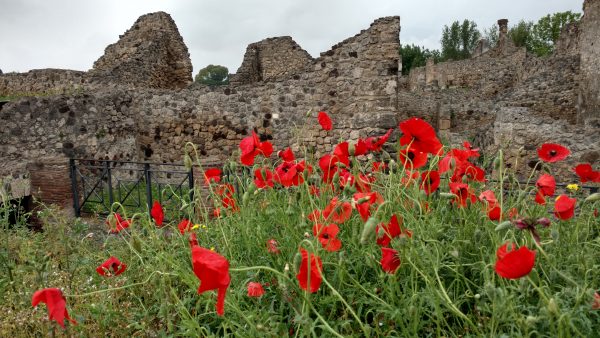 After a rainy night in Sorrento, we woke early the next morning and walked to the train station. Although the streets were dry, I threw my umbrella in my backpack-just in case. We arrived in plenty of time to buy our tickets for the trip to Pompeii and have a cappuccino at the station.

As we waited for the train to depart, an accordion busker stepped aboard. He placed a portable karaoke machine down by the door and began playing Italian greatest hits. He did not get a good reception from the commuters (too early for accordion music?) and left the train just before it departed with not many euros in his tip jar. I thought about the young boy from the day before ( see my previous post) and the life cycles of a Sorrento street busker. O Sole Mio, Volare, That’s Amore…The man may age, but the songs remain the same.

Pompeii was once a  thriving city in the shadow of Mt Vesuvius. It had theaters, public forums, bathhouses, brothels, food producers, laundries and more. The population, estimated to be about 15,000, included all socioeconomic levels, from landowners to slaves. Despite the huge differences in lifestyle and social class, all inhabitants were equally defenseless on an October day in 79 A.D. when Vesuvius suddenly erupted. Rich or poor, there was no escaping the torrent of hot ash and pumice that rained from the sky, smothering all life equally.  After that, the city slept for over one thousand years under the ashes.

The House of the Golden Bracelet

We walked down a path that led to the Antiquarium, a combination visitors center and  small museum (rebuilt in 1947 after being bombed in WW2.)  While most of the treasures recovered from Pompeii are housed in the Museo di Archeologico in Naples,  there are some exquisite pieces displayed here, including glassware, furniture, paintings, jewelry, and coins. In sobering juxtaposition to the luxury of these items are the casts of a family who perished during the eruption. Archaeologists dubbed their home the House of the Golden Bracelet, because of the precious piece of jewelry found during excavation.

After looking at the displays in the gallery, we headed out with the small printed maps received with our paid admission to explore, forgoing the guided tour that was heavily suggested. Pompeii is vast, and there is a lot to see-too much for one day. I wanted to start at the one place that was highest on my personal list-the Villa of the Mysteries.

My friend Dennis had no real tourist agenda and was happy to accompany me to the Villa. Located on the outskirts of the city, we walked along a road where chariots once rolled.  We passed by the Stabian baths, a brothel, the House of the Faun, the House of the Tragic Poet and more, saving these to explore on the way back. Along the way, I did pause to shoot a few jewelry photographs in the of the cemetery of Porto Ercolano, the crumbling tombs, and monuments providing the perfect context for the ancient coin rings.

Villa of the Mysteries 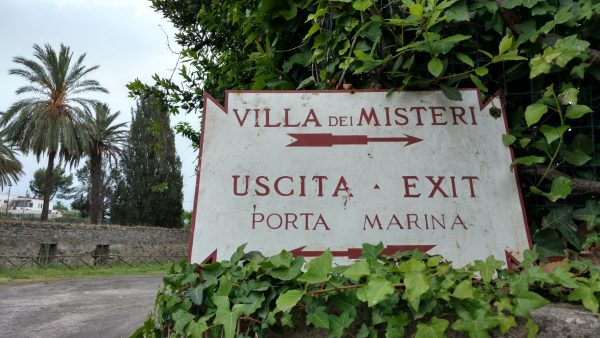 There were few tourists around as we neared the entrance to the Villa. The air was fresh with the smell of flowers and the sweet singing of birds. The season of spring infused life and vitality to the sleeping city, a reminder that everything is part of a cycle.

The walls inside contain one of the largest and most beautiful of all ancient paintings, depicting the stages of an initiation into the mystery religion of Dionysus (The God of Wine). Archaeologists have not been able to come to a complete agreement or understanding about the full meaning of the scenes. Little is known from written sources as the initiates, mostly women were sworn to secrecy. In 186 B.C., the Roman senate banned the mysteries linked to Dionysus-Bacchus, alleging that they encouraged depravity. (Hmm…sounds like a witch hunt to me.) 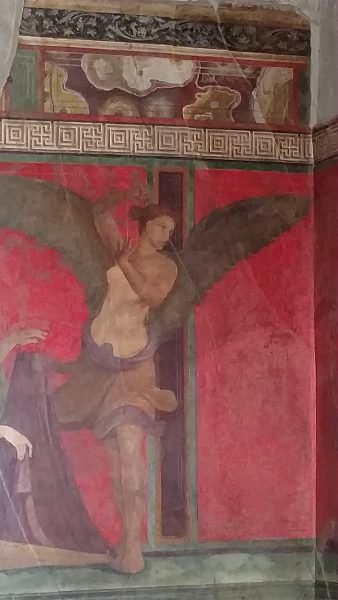 The colors are unbelievably vivid, the photos  I took with the dim available light give an idea of how bright the pigments have remained, even after about two thousand years. Elsewhere in the villa are beautiful examples of the ornamental style painting popular in the time, including a lot of Egypt-influenced imagery. These were beyond the capabilities of my camera to capture, so I am showing just one details here, for the color.

I could not resist placing my jewelry on the beautiful mosaic floor and taking a few photographs.

There were only a few other visitors at the Villa when we got there around 10:00. I felt that nothing else I would see this day could possibly top this experience, and was glad to have been among the first there that morning. We met a lot of people heading to the Villa as we walked back down the road. We stopped to explore to see the previously mentioned sights we passed earlier, ending up at the civic forum.

We had a lunch of pizza in the busy cafe, which was now bustling with tourists from all over the world. I really needed the food to get re-grounded after that visit. It was also a good thing we brought umbrellas as the sky began to pour.

The moody lighting and lack of tourists (taking shelter inside) provided more opportunities to shoot jewelry in what would usually be the crowded civic forum.

In Closing, a few more shots 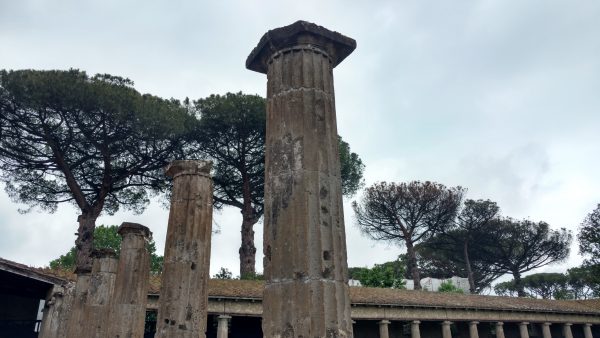 By later afternoon, seeing as much as we could absorb for the day, we walked back toward the exit. I will definitely return to see what I missed another time. I will also see Herculaneum on another visit-and Paestum. We still had another adventure in store that day, getting back on the train and heading to Torre Del Greco, to visit a friend, which will be the topic of the next post. Ciao!